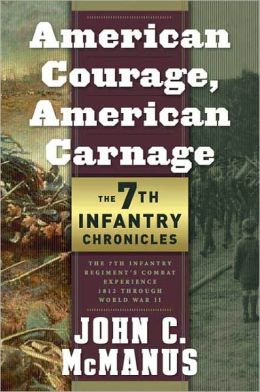 About the Book
Only one U.S. Army regiment, the 7th Infantry, has served in every war from 1812 through the present day. In The 7th Infantry Regiment: Combat in an Age of Terror, heralded military historian John C. McManus told the dramatic story of the 7th Infantry Regiment’s modern combat experiences, from Korea through Iraq. Now, in this compelling prequel, McManus relates the rest of the 7th’s amazing, and previously untold, story from the Battle of New Orleans through the end of World War II. No American unit has earned more battle streamers and few can boast more Medal of Honor winners.
In the months leading up to the War of 1812, Congress authorized the creation of this regiment. It fought with distinction at the Battle of New Orleans, anchoring General Andrew Jackson’s main defensive line, forever earning the nickname “Cottonbalers” because the soldiers of the 7th were said to have battled the British from behind large rows of cotton bales. From now on, whenever Americans went to war, the Cottonbalers would always find themselves in the center of the action, where the danger was greatest.
Between these covers is the whole story, told through the eyes of the soldiers–the realities of combat expressed in raw human terms. From the marshy grounds of the Chalmette plantation in New Orleans to the daunting heights of Chapultepec in Mexico City; from the bloody horror of the long, stone wall at Fredericksburg to the deadly crossfire of the Wheatfield at Gettysburg, from the shocking gore of Custer’s massacre at Little Bighorn to the desperation of dusty frontier battles; from the foggy hills of Santiago in Cuba to the muddy, pockmarked no man’s land of Belleau Wood in France; from the invasion of North Africa to Sicily, Anzio, southern France, the Vosges Mountains, the breaching of the Rhine, and the 7th’s triumphant capture of Hitler’s mountain home at Berchtesgaden in May, 1945, this remarkable book chronicles multiple generations of Cottonbalers who have fought and bled for their country.
American Courage, American Carnage is an inside look at the drama, tragedy, fatigue and pathos of war, from America’s early nineteenth century struggles as a fledgling republic to its emergence as a superpower in the twentieth. Based on nearly a decade of archival research, battlefield visits, interviews, and intensive study, and illustrated with copious maps and photographs, this book is a moving, authoritative, tale of Americans in combat.